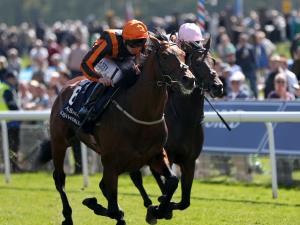 ‘Given all the results I think we have a right to be there’.

Connections of Telecaster are leaning towards letting him take his chance in the Prix de l’Arc de Triomphe.

Winner of the Dante Stakes last season, the four-year-old has already made two victorious trips to France this year, winning a Group Three at ParisLongchamp and a Group Two and Deauville in impressive fashion.

With all the trials now out of the way, trainer Hughie Morrison saw nothing to put him off, while respecting the two market leaders Love and Enable.

“It’s definitely a possibility that he could go,” said Morrison.

“Nothing really sprang out of the trials to put us off. The filly who won the Vermeille (Tarnawa) was impressive, but connections said afterwards that was her day.

“On quick ground the Vermeille was run three or four lengths quicker than the Foy. You might not be able to take that literally, but given all the results I think we have a right to be there.

“It was heavy when we won at Deauville so if it was soft that would be in our favour, I think – we wouldn’t want it quick, but hopefully at that time of year it wouldn’t be anyway.

“It all seemed to click last time, he seems to have taken the race very well.

“We’re realistic, but the owner quite rightly feels finishing third in the Arc might be viewed better than a Group One anywhere else in the world at this time of year – bar the Champion Stakes.”

Morrison also had news of Le Don De Vie, winner of a Listed race at Windsor last time out.

“He goes into quarantine on Wednesday and will go straight to Australia,” he said.

“I just hope he gets into one of the big races, it’s irritating that he didn’t get rated as high over there as he did here – especially given Communique franked the form on Sunday (second in German Group One).

“He’s probably a well-handicapped horse, but he probably needs to be rated a touch higher to get into one of the big races.

“Aidan O’Brien seems to be sending a very strong team this year, he’s even sending a Derby winner (Anthony Van Dyck), so he must want to win it (Melbourne Cup).”

Mr Lupton likely to miss Ascot and wait for York