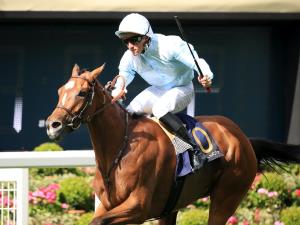 Watch Me is flying for Prix Rothschild bid

Appleby’s Summer Romance heads to Deauville in top form too.

Francis-Henri Graffard is confident Watch Me is at the top of her game as she bids for a second Group One success in the Prix Rothschild at Deauville.

The Olympic Glory filly was a surprise winner of the Coronation Stakes at Royal Ascot last summer, before going on to finish fourth in the Prix Jacques le Marois and third in the Prix de l’Opera.

She made an impressive start to her four-year-old campaign in a Listed event at Deauville, and her trainer is looking forward to seeing her return to the highest level on Sunday.

Graffard said: “She is in great form and has improved a lot since her seasonal comeback three weeks ago.

“It’s a Group One, and Group One races are always hard to win, but I could not be happier with her condition.”

Watch Me is set to face five rivals over the straight mile, with British hopes carried by the Charlie Appleby-trained Summer Romance.

The grey daughter of Kingman steps back up in class after landing the Group Three Princess Elizabeth Stakes at Epsom on Derby day – and receives an 8lb three-year-old allowance from Watch Me and the two other older fillies in the race, Half Light and Norma.

Appleby said: “We had hoped to get a prep run into her before she ran in the 1000 Guineas, but obviously we couldn’t. She still ran respectably in the Guineas, and we were delighted with her at Epsom.

“She gets a nice bit of weight from the older fillies, which obviously helps.

“She looked very exciting as a two-year-old early on, and then lost her way. But we think she’s back on track now, and I would hope she’ll be very competitive.”

Know It All bids to provide legendary Irish jockey Johnny Murtagh with his first Group One success as a trainer, having carried the Qatar Racing colours to an impressive victory in a Group Three at Leopardstown a month ago.

Murtagh, whose string has been in tremendous form this season, said: “She’s won her Group Three, and we’ve been very happy with her since – she’s going there in great form, hopefully.

“(Owner) Sheikh Fahad picked this race out, and I’m glad he did because it’s a fillies’ only Group One with six runners, but there are obviously some good ones in it.

Speak Of The Devil completes the sextet.

Deauville next on the agenda for Arc hope Sottsass

Alpine Star has Deauville date on her radar

Our Irish racing expert Tony Keenan gives his verdict on the two flagship contests from the 2020...
bet365
Sign up to bet365. Click to View Bonus Code Details