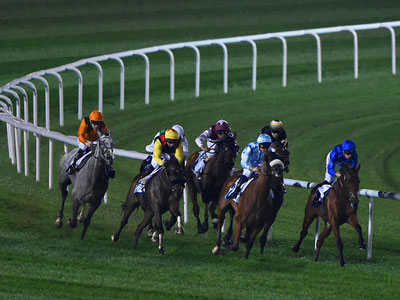 Our Dubai columnist selects his five horses to keep a close eye on during the 2020 Dubai World Cup Carnival.

Having found Baroot in this section 12 months ago (a winner at 33/1), hopefully we can repeat the feat with five horses to follow, this time outside of Godolphin (who are covered in a separate piece here).

GABR (Doug Watson)
Gabr is probably one of the classier horses in Doug Watson's yard, and one that can now shine having had excuses for his two starts in Dubai to date. There was always an element of unfinished business about him when in the care of Sir Michael Stoute, not immediately kicking on from his second to Without Parole on his three-year-old reappearance for example, but he did collect a listed success at Goodwood and signed off for Stoute with a fair third in the Group 3 Darley Stakes. It was a rush for Watson to get Gabr to the track last season having arrived late, limited to one start on the final day of the season, whilst 1m around the tight Abu Dhabi track wouldn’t have been ideal on his return, duly finishing well held. That run will have served a purpose and expect him to be competitive at around 9f/10f this Carnival.

GOLDEN JAGUAR (Ahmad bin Harmash)
There are some doubts creeping in regards the resolution of Golden Jaguar, so some risks attached with this one, but I am not convinced he has had his ideal conditions too often throughout his career and hopefully he can strike granted such a scenario. That scenario for me is 6f or 7f on turf, victorious the once he raced over 7f on the grass at Meydan when he showed a striking turn of foot to shoot clear in the Meydan Classic Trial last season. He then passed virtually the whole field over 1m next time only to wobble late on, once again confirming himself as a turf horse. Bearing that in mind his effort in the UAE Derby, and on his reappearance at Jebel Ali, are safely dismissed, and he bounced back to form in the Listed National Day Cup at Abu Dhabi, the easy mile within his compass and just denied by Taamol. He has been hooded throughout his career, but it wouldn’t be a surprise to see more severe headgear tried at some stage and hopefully he can pick up a race with his stable likely to be in better form during the second half of the season, too.

MIDNIGHT SANDS (Doug Watson)
Doug Watson has dominated the local scene at Meydan so far this year, going through the card on one occasion and saddling 12 winners from 58 runners at the track. Midnight Sands has been responsible for two of those and he can hopefully complete the hat-trick on his next assignment which will come in the Carnival. Thrice-raced for James Given, Midnight Sands has taken well to the dirt which isn’t the greatest surprise given he is by Speightstown and related to winners on dirt. The trip is a slight query at this stage, bred to stay 1m but looking more about speed for me which is a decision Doug Watson will need to make sooner rather than later as 7f horses (the trip for his last two wins) aren’t really catered for at the Carnival. So, it will be 6f or 1m, and I would fancy him strongly in a handicap off 94 over 6f, as there was an element of him coming to the end of his tether last time.

SEMOUM (Fawzi Nass)
Fawzi Nass is typically still to get going this season, 0 from 9 at the time of writing, but that is very much his modus operandi with his firm focus on January onwards. One horse who could do well for him, on either turf or dirt, is Semoum who has been brought along steadily in the UK by George Peckham and Roger Varian and now looks ready to take the next step up. I suspect the dirt has always been the plan ever since Nass paid $400,000 for him as a yearling, by Bernardini out of Curlin mare, so an element of what he has achieved on turf as being a bonus. He managed just two runs in the UK this season, winning at Hamilton before slightly disappointing at Newmarket and he was also withdrawn when kicked at the start at York, but all that ensures he is fresh going into the Carnival and hopefully he can make his mark.

SYMBOLIZATION (Simon Crisford)
Simon Crisford has inherited a couple of nice horses off Godolphin and the inclusion of Symbolization is worth the risk despite cutting little ice in a couple of starts here last season. Saying that, he did shape OK in fourth behind Nordic Lights on his reappearance before finishing well held in another handicap over 1m, that day forcing the pace and folding tamely when headed. Reverting to more patient tactics is one source of hope, as his back class as not too long ago he was Godolphin’s representative in the Irish 2000 Guineas when fifth to Romanised. It was quite an intense start to his 3yo campaign as he also took in the St James’s Palace Stakes at Ascot and it is to be hoped a good break, and the fact he has been gelded, can contribute to him fulfilling his potential.

boylesports
Sign up to BoyleSports and get up to £25 in free bets.