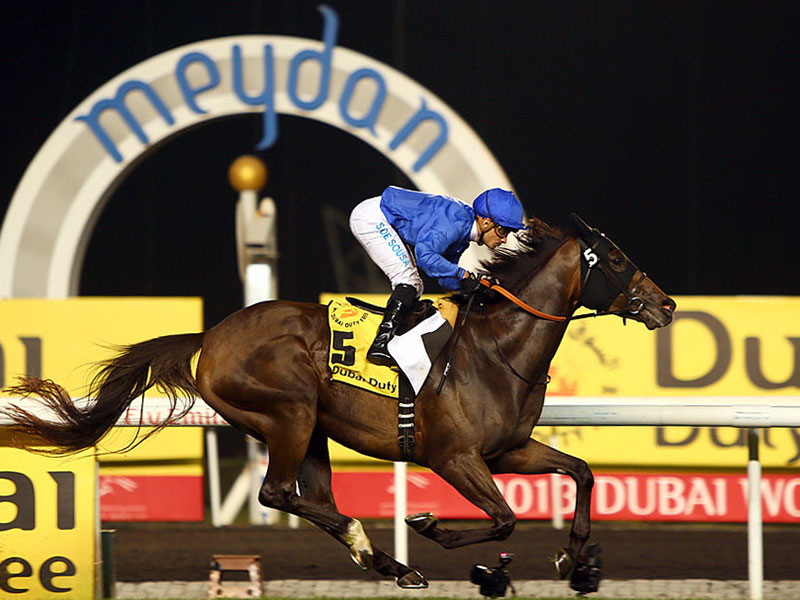 We highlight the horses that can lead Godolphin's star-studded team at Meydan.

With so many of the turf handicaps dominated by Godolphin last season, it is hard to imagine anything other than more of the same this season, particularly as the squads of Charlie Appleby and Saeed bin Suroor look to have plenty of depth to them once again. Here, Stephen Molyneux identifies five to follow throughout the Carnival.

FINAL SONG (Saeed bin Suroor)
As a rule, Saeed bin Suroor is stronger in the three-year-old division at the Carnival and he will be keen to reaffirm that point this year, Final Song looking just about the pick. Being by Dark Angel, she perhaps isn’t a natural for the dirt, but these races often take little winning and there are now more options on turf in any case. Her best run came when third in the Queen Mary, also running with credit in the Duchess Of Cambridge Stakes and although those facts point to her being more of a sprinter, there is hope from her pedigree that she can stay at least 1m. The local bunch look average to say the least, and she may not need to stay fully and still be good enough to win races.

MAGIC LILY (Charlie Appleby)
The Cape Verdi and Balanchine are the only two races confined to older females throughout the whole Carnival and they are often dominated by Godolphin. Magic Lily could well be the best filly or mare to run in this series of races since Certify and although it might be pushing it to suggest she can get close to the sort of form she showed when third to Laurens in the 2017 Fillies’ Mile, Appleby clearly believes she is still well worth persevering with.  She returned from 721 days off in France in October on what was desperate ground and she wasn’t disgraced in second before then disappointing at Lingfield, that race was the best part of six weeks on but still potentially came too soon for her given her long previous absence. Striding on back at 1m/9f could well see her in much better light and an all-important Group-race success, however minor in the wider scheme of things, will be firmly on the agenda before the daughter of Dancing Rain retires to the paddocks.

ON THE WARPATH (Charlie Appleby)
A big reason why Godolphin do so well here is that that have the luxury of curtailing a horse’s European campaign very early in preparation for Dubai, and that was very much the case with On The Warpath who had cried enough in England virtually before the season had got underway. The Guineas meeting to be precise was the last time we saw On The Warpath but his dominant display there when dropping to 6f for the first time firmly suggests he could rank higher as a sprinter. A winner of one of his three starts at Meydan last year, he has always been on the head-strong side, so it shouldn’t come as any great surprise that sprinting could be the making of him and there should be plenty of opportunities for him off his mark of 109.

ROYAL MARINE (Saeed bin Suroor)
Saeed bin Suroor will have Benbatl and Dream Castle in situ once again, both those horses having impressed on the path to the Dubai Turf over the last couple of years, and it could well be that he has Royal Marine earmarked for those races this time around. His profile is by no means dissimilar, classically campaigned if ultimately under-achieving at three and now hitting Dubai as a four-year-old with something to prove. A Group 1-winner as a juvenile, he has been gelded since he was last seen in July, that run in the Prix Jean Prat his fourth in relatively quick succession with his performance levels getting progressively worse. He had started off OK when fourth in the Craven behind Skardu and he is surely worth at least one more chance to confirm all his earlier promise.

ZAKOUSKI (Charlie Appleby)
If collateral form is anything to go by then Zakouski is a shoe-in to win races at the Carnival. Of course, it isn’t always that simple, but Charlie Appleby spoke in glowing terms about this horse last year when he had just the one run to his name, that a victory over Headman who would go on to end 2019 with a rating of 115 and a pair of Group 2s to his name. Zakouski was only seen once in that period, finishing an underwhelming fifth in the Craven when potentially getting above himself beforehand. That feeling is backed up by the fact he has been gelded since then whilst there is also a chance he turns out to be better at shorter than 1m. Either way, there is plenty of scope off his mark of 100.

betway
Sign up to Betway, deposit and place a qualifying bet and get a free bet up to £30.