Located at Gosforth Park to the north of the city, Newcastle Racecourse has staged racing since 1882 and hosts major races both on the flat and over jumps. Over the autumn and winter of 2015/16 the course will undergo an £11m redevelopment which will see a new all-weather surface replace the Flat turf track.

The highlight of Newcastle’s year is the Northumberland Plate meeting in June, a three-day fixture that also includes the Gosforth Park Cup and the Chipchase Stakes. Those races are both valuable sprints while the ‘Plate’ – also known as the Pitmens’ Derby – is a two-mile handicap and often billed as a Northern Hemisphere Melbourne Cup.

Over jumps Newcastle stages a Grade 1 contest in the shape of the Fighting Fifth Hurdle – a race which, along with the Christmas and Champion Hurdles forms a ‘Triple Crown’ of top two-mile hurdle races in the UK. Certainly, past winners of the Fighting Fifth are a who’s who of hurdling champions including Comedy Of Errors, Night Nurse, Sea Pigeon, Kribensis, Beech Road and Punjabi plus the aforementioned Overturn, who figures on the roll of honour for both of Gosforth Park’s famous races having won the ‘Plate’ in 2010 and the ‘Fighting Fifth’ the following year. 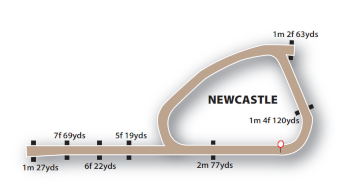 Left-handed, oval. Newcastle switched from turf to all-weather during the winter of 2015/16, and like Wolverhampton, the surface it uses is Tapeta. It differs from the majority of the all-weather tracks in that as well as a round course, it has a floodlit straight mile.


It’s a massive advantage to get anywhere near the fence in races on the round course at Newcastle, especially in an event like the Northumberland Plate, because the turns are long and, if you’re more than three or four deep, you’re forfeiting loads of ground. You need to be on a very good one to win from a wide berth. There’s a bit of a run off on the round track, too, where the ground tends to fall away from you quite steeply towards the initial bend. It’s a very fair track, though, beautiful to ride.

View from the saddle: Jason Weaver 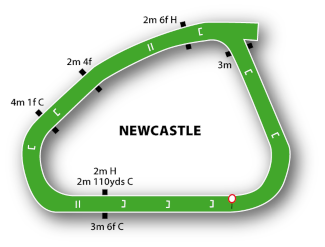 Left handed, galloping with a steady uphill rise from the home turn. Stiff nature often results in steadily-run affairs, especially on the hurdles course, many races really beginning in earnest only once in line for home. As such, races often fail to represent the test of stamina they might, whilst this probably also explains a lower-than-expected casualty rate over fences. A position towards the stand rail can be an advantage in the home straight, and it's no coincidence that's where the senior northern jockeys usually head.


I’ve always rated Newcastle among the best tracks in Britain. The fences take a bit of jumping, but they provide a very fair test and, from a jockeys standpoint, I would put it right up there with the likes of Newbury. Those two courses ride very much the same and, while they’re both pretty flat, you need to be on one that stays if you want to get home, both over hurdles and in chases. It’s a long way from the turn in to the winning line and, because it’s quite open, it asks questions about a horse’s stamina.

View from the saddle: Mick Fitzgerald

Enter starting postcode or just click Go to use your current location.